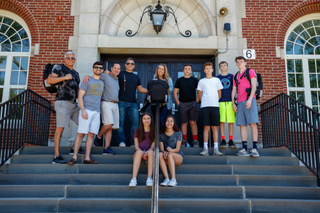 The Bodyguard Armored Backpacks was created and developed by Damian and Angela Ross who founded the Self Defense Company in 2007.

As a defensive tactics instructor and first responder, Damian knows about the danger regular people face on a daily basis and after an active shooter event at New Jersey’s Garden State Plaza in 2013, he and Angela went on a mission to find affordable and effective ballistic protection.

A brief search revealed that ballistic clothing was expensive…very expensive. This is when they decided that there must be a better way. But beyond wearing ballistic protection for work, the Ross’ knew very little about the design, construction and certification.

That began a three year journey spanning three continents to find a real, cost effective body armor solution that was affordable and could fit into every day life.

Their journey ended in Israel with a military contractor who developed their exclusive and patented designs under their direction. Finally in 2007 the Tactical Jacket was launched followed by the original Switchblade Backpack.

In 2018 they decided to focus on the the bulletproof backpacks because they can be used anywhere in any weather and the universal acceptance of a backpack ensures that they go undetected.

In 2020 they finally received their patent for the Switchblade Deployment System and have developed more styles and option.

As we move into the future, the Bodyguard name will be synonymous with high quality ballistic protection for law abiding citizens, law enforcement and security.

Look, the chance of you facing gun violence is still very low, but it happens. Your Bodyguard is like insurance – it’s better to have it and not need it, than to need it and not have it.

We want you to take your Bodyguard with you wherever you go and we pray, this is one product we hope you will NEVER use.